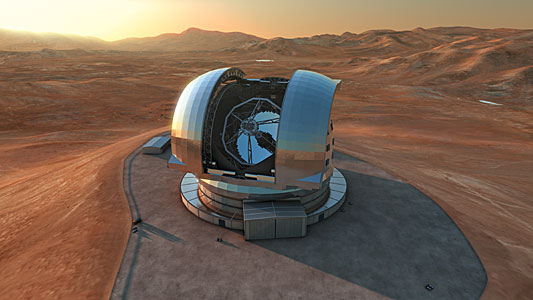 It has been dubbed “the world’s biggest eye on the sky”. Indeed the E-ELT (short for European Extremely Large Telescope) will have a 39 metre main mirror and the ability to collect 13 times more radiation (light) than the current largest ground-based optical telescopes. The E-ELT will correct for atmospheric distortions, and thus produce images 16 times clearer than the Hubble Space Telescope. This revolutionary new telescope will take nine years to become operational, so that first light is expected in 2024. Construction will begin in 2016, and in the tender launched by ESO for Phase 1, two Portuguese companies beat international competitors in securing €1.5 million in service contracts.

CRITICAL Software, a company that develops software solutions, and ISQ, a private organisation that provides inspection, testing, engineering, training and technical consultancy services, have just signed 3-year contracts with ESO, with options to extend the contracts for 9 and 10 years, respectively.

CRITICAL Software’s proposal topped 12 others, submitted by companies from the Czech Republic, Germany Italy, Spain, United Kingdom and Chile. ISQ’s proposal was selected amongst five that were assessed by ESO, having been submitted by similar organisations based in Spain and in Germany.

The contract with CRITICAL Software is for Independent Software Validation and Verification (ISV&V) for the E-ELT programme. This includes tasks such as analysis of the software requirements for the telescope control systems and the preparation and implementation of manual and automatic tests. ISQ, for its part, has been contracted to, amongst other tasks, verify material, parts and final products, through independent checks, surveillance, tests and inspections. Their services will support ESO in Quality Assurance and Quality Control (QA/QC) of the manufacturing of the most critical structures and systems involved in the construction and assembly of the E-ELT.

The services of both companies will be crucial during the assembly, integration and verification stages, in several European countries and in Brazil, as well as at the construction site, on the 3060-metre high Cerro Amazones mountain, in the Chilean Atacama Desert. With this powerful “eye on the sky”, the international space science community will be able to address some of the greatest scientific challenges of our time: the search for extrasolar planets similar to Earth, measuring the properties of the first galaxies and stars, and understanding the nature of dark matter and of dark energy.

According to Pedro Carneiro, Vice-president of the FCT Board of Directors, the Portuguese representative on the ESO Council, “CRITCIAL Software and ISQs success are proof of the international competitiveness of our industry and a positive outcome of the liaison work carried out by the Portuguese delegation to ESO“.

“This is an excellent result for all: ESO, Portugal, FCT, ISQ and CRITICAL Software. ESO will benefit form the experience, competence and vitality of two organisations that have stood out internationally, in sectors dominated by companies based in countries that are considered to be technologically more developed”, is the view of Paulo Chaves, Business Leader at ISQ.

For Paulo Guedes, CRITICAL Software’s Business Development Director, “We are delighted to have been selected for the construction of the most advanced optical telescope in the world, with ISQ. This is a clear international acknowledgement of both ISQ’s work and ours – we have become well-established in extremely demanding business areas and markets”.