Participation of Portugal in Horizon 2020 is record-breaker

Almost two years into the current European Research and Innovation Framework Programme Horizon 2020, scientists, research centres and businesses in Portugal have secured €204 million in funding, which accounts for 1.8% of the total Horizon 2020 funds awarded. This is a significant improvement on the 1.15% of funding secured in the previous framework programme FP7, and a strong indication that Portugal’s R&D base is well on course to reach the target of 1.5% for the 2014-2020 period.

By the end of 2014, Portuguese researchers, research teams and businesses had secured €146 million of the approximately €8.5 billion awarded in H2020 calls (1.75% success rate). Considering that Portugal’s contribution to the Horizon 2020 budget was €120 million in 2014, the country is significantly above the break-even point, a first-time occurrence in the history of Portuguese participation in EU framework programmes.

This positive trend has extended into 2015: with one third of the 2015 call results known, Portuguese scientists have secured 2% of the Horizon 2020 funds for the year – again, well above the target of 1.5% for the entire 7-year period. 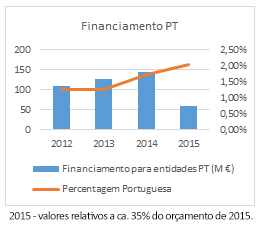 Of the 413 proposals with Portuguese involvement approved to date, 97 are coordinated by Portuguese research institutions. These include 11 proposals of the Twinning Programme, aimed at establishing partnerships between research institutions of so-called low-performing countries with European world-leading counterparts, in order to foster the scientific quality and internationalisation of the former.

Detailed, and regularly updated information on the performance of Portugal’s R&D base in Horizon 2020 is available here.