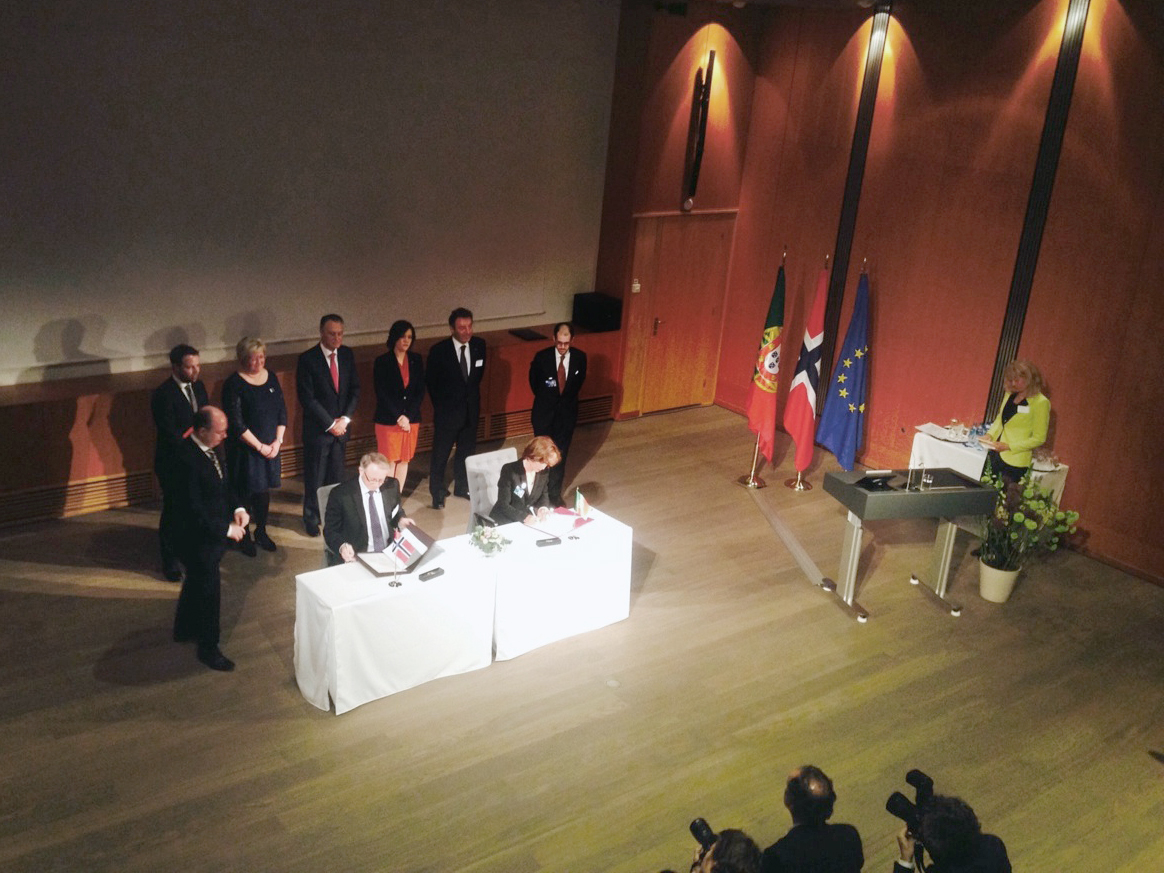 Portugal and Norway share scientific and economic interests in the ocean: both countries benefit from marine natural resources, both have jurisdiction over large ocean areas (Portugal, for example, has one of Europe’s largest exclusive economic zones of maritime space, of more than 1 700 000 km2 – eighteen times its continental shelf). Both nations are seafaring nations, with most of their populations living in the coastal regions, and a large proportion of GDP deriving from coastal regions and/or ocean-related activities. Furthermore, Portugal and Norway have, to large extents, matching marine ecosystems, climates, geo-locations, scientific areas of expertise, and maritime economies. It is with the goal of exploiting these complementarities, to the great benefit of both countries, that the funding agencies of each country – Portugal’s FCT and the Research Council of Norway – signed the Memorandum of Understanding for Ocean-related Scientific and Technological Cooperation, last May.

The overall goal of the MoU is to prioritise cooperation with Norway in ocean science research, as of the coming year. The MoU sets out some of the ways in which this cooperation may be put in place. These include joint funding of R&D projects, organisation of seminars, symposia, workshops and other meetings between academia and companies in both countries (with a view to producing a joint roadmap for cooperation), exchange of researchers and technical staff, incentives to bolster the involvement of industry as active actors in knowledge transfer and  innovation. The MoU also includes the exchange of information and best practices among the public agencies involved in the collaborative process, aiming at greater insight into each country’s landscape for more effective support for mutual cooperation.

Besides bilateral Portugal-Norway collaborations, at the multilateral level, the cooperation shall aim to consolidate common positions and step-up joint performance under Horizon 2020 and other collaborative platforms, such as Joint Programming Initiatives (in particular JPI Oceans), ERA-NETS, EUROSTARS, EIT marine initiatives, and others, where both Portugal and Norway already have joint participations.

The Blue Economy – a priority for Portugal and globally

The oceans and the seas have long been the focus of international fora, for their vast resources (transport, communication, food, pharmaceuticals, energy, geological and genetic) and for the eco-services they provide (climate regulation and pollutant storage and recycling, for example). In Portugal, this focus dates back to 1998 (the year of the international exhibition EXPO98 in Lisbon), with an ocean sciences-specific funding programme at FCT. The outcome of this programme, that provided funding from 2000 through to 2004, was the establishment of critical mass in this field, by bringing together separate strands of funding, for ocean-related areas.

In 2006, the first Portuguese Strategy for the Oceans was published, and revised in 2013 (after public consultation). This is an overarching document, which lays out Portugal’s vision for economic, social and cultural development, based on the preservation and sustainable use of the resources and services of the ocean, underpinned by world-class scientific research and innovation. Indeed, the Blue Economy, as it is called, has emerged as one of the 15 priority themes of the Portuguese Smart Specialisation Strategy for R&I for 2014-2020. According to the findings of an in-depth analysis of the Portuguese R&I system, carried out by FCT, Portugal holds a competitive advantage in ocean R&I (fishing, marine biology, oceanography and maritime engineering) and is highly specialised in this domain, both economically, scientifically, and technologically.

According to Telmo Carvalho, head of the newly created FCT Ocean Office, “Today, as a result of 15 years of concerted investment in ocean sciences, we have a well-established scientific community, with specific strengths in areas such as robotics, biotechnology, geology and oil and gas. A research field has been created, well-placed to contribute to the development of the Blue Economy”.

The main mission of the FCT Ocean Office is to support the FCT Board in coordinating programmes and funding schemes that may be relevant for ocean sciences, in order to sustain the growing critical mass in this field of research in Portugal, support the internationalisation of this very multidisciplinary community, and foster interactions between research and industry. The FCT Ocean Office will thus play a major role in putting into practice this latest MoU with the Research Council of Norway.