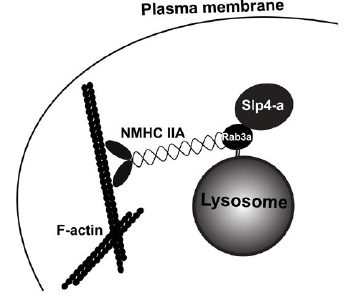 The Journal of Cell Biology recently published a study led by two researchers from the Centro de Estudos de Doenças Crónicas (CEDOC), of the NOVA Medical School of Faculdade de Ciências Médicas – Universidade NOVA de Lisboa. The research describes the role of a protein complex essential for repairing cell membrane in the context of infection by tuberculosis and other chronic diseases. The paper was included on the Faculty1000 list, which collects articles of high importance and potential.

The research was based on the work of a Harvard Medical School (HMS) team, which discovered that virulent and non- virulent tuberculosis pathogen strains (Mycobacterium tuberculosis), though using different mechanisms, can both cause infection. In both strains the infection causes damages to the membrane of the host cell and cell death. After an infection caused by the virulent form of the pathogen, the cell cannot repair the damage created in the membrane, which leads the M. tuberculosis to infect neighboring cells, causing fulminant tuberculosis. On the other hand, in infections caused by non-virulent strains, cells are also damaged in the membrane but are able to repair such damage, as the cell dies but the microorganism does not spread to neighboring cells.

The research focuses on the identification of the mechanisms involved in the cell membrane repair process, which was not known. They found that Rab3a protein, which had already been described in other contexts such as neuronal synapses, had an essential role in the repair of cell membrane, since the repairing process is inhibited in the absence of this protein. To operate, Rab3a needs to recruit effectors (other proteins) that bind to it and create a protein complex, which becomes active and functional in cell membrane repair by lysosomes.

This new knowledge can be applied to tuberculosis, but also to other scenarios in which cell membrane damage occurs, such as physical exercise. It can also be used to find new solutions for some rare diseases developed from lysosomal overload, which means developing new therapies based on the release of lysosomal contents, responsible for causing these diseases, outside the cell.

Otília Vieira and Duarte Barral, researchers at CEDOC, coordinated this study, which had the collaboration of Universidade de Coimbra and HMS and was funded by the Harvard Medical School – Portugal, an International Partnership funded by FCT.

CEDOC, with the IBET, IPOLFG and ITQB –UNL research centers, is a member of iNOVA4Heath – Programa em Medicina Translacional, an FCT R&D Unit.